From research of historical documents, under the generous guidance of City of Albany librarians Sue Lefroy and Jenny Reed, the most likely date for the first recorded Mass at Mass Rocks was in January 1838. This was celebrated by a Chaplain from a French frigate named L’Heroine that was escorting six French whaling ships. 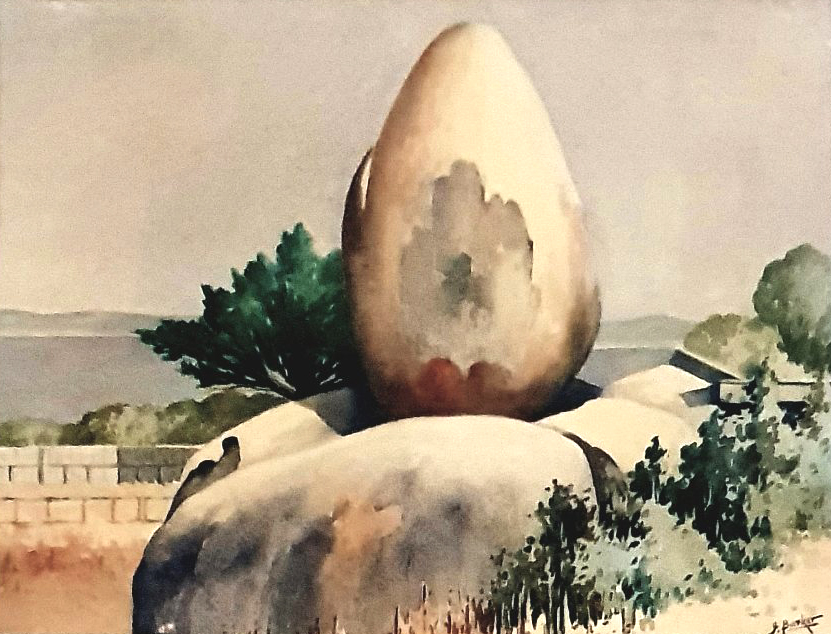 Father Brady visited Rome the following year and was appointed as the first Bishop of Western Australia. However prior to the actual establishment of the Church, Mr Lawrence Mooney and his family are recorded as having been the first Catholics in Albany, practicing before any clergy arrived. Lawrence was born around 1810 and having enlisted in the 21st Regiment of Fusiliers at the age of 18, he married the following year and travelled to Hobart as a guard on a prison ship in 1833, with his wife. They moved to Albany in 1836.

Lawrence is said to have climbed to the summit of Mt Clarence on Sundays, where he used to say the Rosary with an intention to bring priest in Albany. He was honourably discharged in 1840, having decided to make Albany home. It is said that he became an outstanding inspiration to the Catholic settlers of Albany. The family home served as the community church for many years.

Over time the Mooney’s home was used as a school run by the Sisters of St Joseph of the Apparition. Dr Brady, then Bishop of Western Australia, celebrated Mass there and baptised children. Lawrence assisted the priests of the Holy Heart of Mary (the Spiritan Fathers) sent by Dr Brady being recorded by an unknown author as “a source of sustenance for priests who were tired and hungry after walking for miles through the bush, or riding a jaded horse, or suffering the sickening jolt of a boneshaking cart.”

In 1855, Coadjutor Bishop Serra visited Europe and returned with four sisters from the French order of St Joseph of the Apparition, who took over the Fremantle Primary School and established a Secondary School in that town.

The following year, public funds were withdrawn from the Catholic School system, however sufficient numbers of fee paying students were available to support the Catholic system.

In Albany, Town Lot 331 had been granted to the Catholic Church in May 1855. The church also acquired three other lots centred on Aberdeen Street. 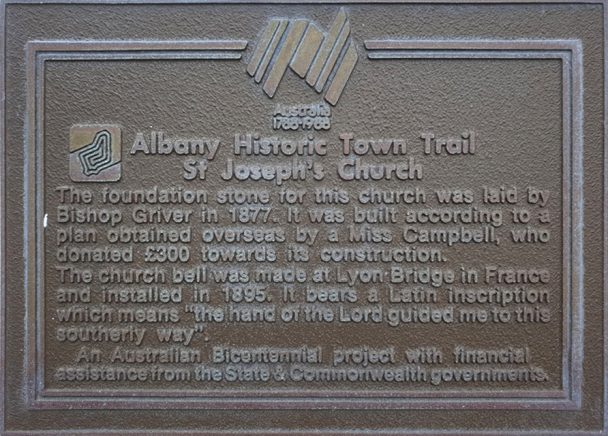 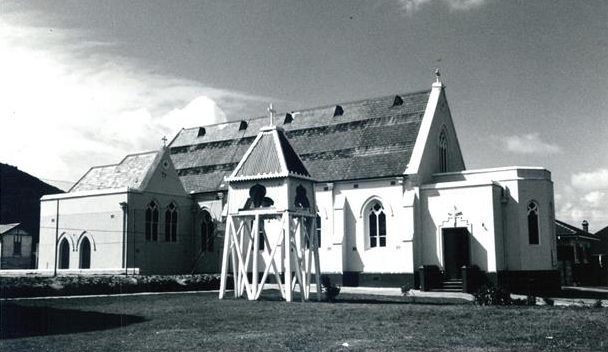 Over the years there have been a number of modifications and additions: 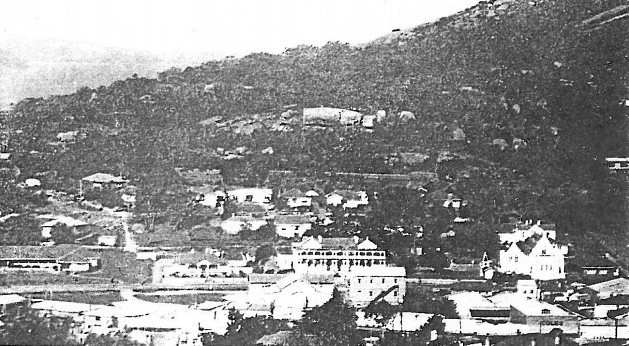 In 1878 Mother Teresa and two Sisters of St Joseph of the Apparition, and the secular teacher arrived in Albany. They quickly assumed responsibility for the primary school and established a secondary school in rented premises. Their first building project was a two-storey primary school, situated beside the old Church. In the same year, a new Church was opened on the eastern side of Aberdeen Street. It was consecrated the Church of St Joseph of the Apparition.

The construction of St Joseph’s Convent followed and the Sisters moved in on 21st June 1881. St Joseph’s Convent was the first secondary school established in a country area in Western Australia. It was known as St Joseph’s School for Young Ladies and offered a curriculum of ‘higher learning’. Two of four of the Sisters who had arrived from France in 1855 were among the five strong Communities in Albany. They were Reverend Mother Julie Cabagnol, Superiores until her death in 1895 and Sister Zoe de Chamouin. 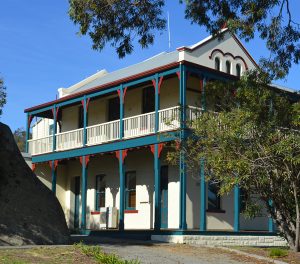 In 1898 the Sisters extended St Joseph’s Convent by adding a wing at each end if the building, with a veranda around three sides. Later a freestanding section was added behind the place to accommodate growing class sizes. St Joseph’s became a general-purpose centre for the Parish, providing a community room for parishioners, a parish office and an office for the Sisters. Other rooms were hired out at nominal rates to low income/non profit groups as a meeting place. Occasionally, one of the larger rooms was made available for a wake.

The Convent closed in 1976. Cyclone Alby badly damaged the building in 1978 and architects Hobbs, Smith and Holmes were involved in the restoration of the place.

Sisters of St Joseph of the Sacred Heart

Aside from the apostolate that we had in Albany, the Sisters of St Joseph of the Sacred Heart have staffed a Motor Mission Apostolate throughout the many communities of our parish for over thirty years.

Originally the Sisters were based in Tambellup and their Mission took to Cranbrook, Manypeaks and South Stirlings in the south, Broomehill to the north, and the long south-eastern run through Borden, Gnowangerup, Ongerup, Jerramungup, Gairdner, Bremer Bay and Wellstead. Later the Sisters moved to the more centrally located community of Ongerup and continued their Mission from there. A further change in Parish boundaries saw South Stirlings and Cranbrook being taken into the Mount Barker Parish and Tambellup into the Parish of Kojonup, while Broomehill was under the pastoral care of the Parish Priest of Katanning.

The decline of vocations to the religious life has led to a much greater involvement on the part of the laity in our Church, and a number of parents (mainly mothers), who have been trained by the Sisters to teach the religious education programme in their local schools. This has given the Sisters more time and greater access to the wider family group. The future of the Motor Mission Apostolate in these sparsely settled communities is seemingly to be directed more and more towards the faith life of the family… lending support in whatever form it is needed and according to the resources available to the Sisters.

In appreciation for the great witness the Sisters have been and continue to be in our Parish Community, it has been decided to build a church and parish centre at Bremer Bay, that would continuously acknowledge, proclaim and memorialise the work of the Sisters of St Joseph, who have become known throughout the length and breadth of our nation as the “Brown Joey’s”! And so it happened. On 22 March 1987, the whole community in jubilation celebrated the consecration of the church through the blessing of Bishop Peter Quinn with Fr Hugh Galloway, the other priests and the people of God.

In the same manner, on 21 June 1990, Holy Family Church was built near the school in Spencer Park to accommodate our students and staff of the St Joseph’s College during their school Masses as well as to provide adequate spaces for our parishioners during the big celebrations in the parish. The building of the church was spearheaded by Fr Noel Fitzsimons and consecrated by Bishop Peter Quinn. 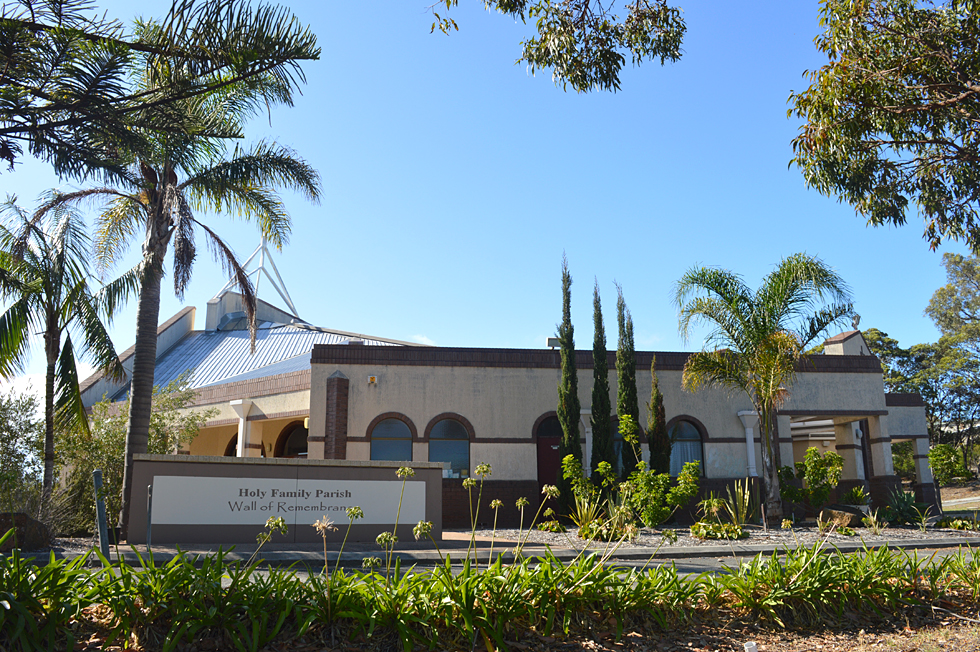 To honour the bravery and the spark of faith of the people, ministries and apostolates to this region has been continued by the Oblates of Saint Joseph since January 2009. For the span of more than ten years now, having the same trust to the Divine Providence and following the footsteps of Saint Joseph in serving the interest of Jesus, the Oblates of Saint Joseph perpetuates to live this legacy of reaching out to the people through teaching catechisms to the children, visiting the sick, serving the people through the celebration of the Holy Eucharist and building the people as the People of God in Albany, Bremer Bay, Ongerup, Gnowangerup and extending up to Jerramungup.

The Oblates of St Joseph is a Catholic religious institute founded in 1878 by Saint Joseph Marello. The institute has provinces or delegations in Italy, the Philippines, the United States, México, Perú, Brazil, Bolivia, India, Poland, Nigeria, Indonesia and Mozambique. The congregation also has members present in Australia and Indonesia. Professed members of the Oblates of Saint Joseph use the post-nominal letters "O.S.J.", which corresponds to the Latin title of the institute.

Joseph Marello's original intent was to found a simple association of men dedicated to a common spirituality, serving the local church in catechesis and assisting local clergy but not publicly professing canonical vows in a religious institute. On March 14, 1878, he opened a house for what he called the "Company of Saint Joseph" and invited four candidates to be members. By 1883, the Company had begun accepting candidates for the priesthood along with candidates to be lay brothers. Eventually the Company of Saint Joseph would become known as the Oblates of Saint Joseph. On September 15, 1921, the Oblates of Saint Joseph received approval as an international institute of pontifical status.

The principal apostolate of the Oblates of Saint Joseph is to work with youth and the poor. However, Joseph Marello's original plan was to have the Oblates serve in whatever capacity the local bishop deemed necessary, so long as it was consistent with the spirituality and life of the Oblates. In the present day, the Oblates serve in many different capacities, depending upon the needs of the bishops where they serve. Common apostolates include education and catechesis of youth, care for the elderlies, parish ministries, serving the poor and underprivileged, and orphanages.

“This is our mission: to make the doctrine of Christ known, loved and lived.” Saint Joseph Marello