Solemnity of Sts. Peter and Paul

"Today we are solemnly celebrating the Holy Apostles Peter and Paul, special Patrons of the Church of Rome: Peter, the fisherman from Galilee, who was the first to confess the faith: “our leader” who “raised up the Church from the faithful flock of Israel”; Paul, the former persecutor of Christians who “brought your call to the nations and became the teacher of the world”. In one of his Homilies to the community of Rome, Pope St Leo the Great said: “These are your Holy Fathers and true Shepherds, who gave you claims to be numbered among the heavenly Kingdom” (Sermo I, in Nat. App Petri et Pauli, c I, PL 54, 422)." 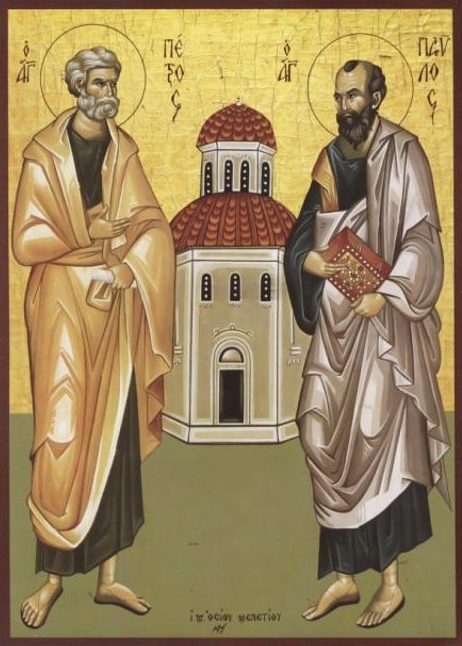 Peter, the fisherman from Galilee

Peter's original name was Simon. Christ Himself gave him the name Cephas or Peter when they first met and later confirmed it. This name change was meant to show both Peter's rank as leader of the apostles and the outstanding trait of his character — Peter (in Hebrew Kephas) the Rock. Peter was born in Bethsaida on the Sea of Galilee. Like his younger brother Andrew, he was a fisherman and dwelt at Capernaum. Peter's house often became the scene of miracles, since the Master would stay there whenever He was teaching in that locality. Together with his brothers John and Andrew, Peter belonged to the first of Jesus' disciples (John 1:40-50).

After the miraculous draught of fish on the Sea of Galilee, Peter received his definitive call and left wife, family, and occupation to take his place as leader of the Twelve. Thereafter we find him continually at Jesus' side, whether it be as spokesman of the apostolic college (John 6:68; Matt. 16:16), or as one specially favored (e.g., at the restoration to life of Jairus' daughter, at the transfiguration, during the agony in the garden). His sanguine temperament often led him into hasty, unpremeditated words and actions; his denial of Jesus during the passion was a salutary lesson. It accentuated a weakness in his character and made him humble.

After the ascension, Peter always took the leading role, exercising the office of chief shepherd that Christ had entrusted to him. He delivered the first sermon on Pentecost and received the first Gentiles into the Church (Cornelius; Acts 10:1). Paul went to Jerusalem "to see Peter." After his miraculous deliverance from prison (Easter, 42 A.D.), Peter "went to a different place," most probably to Rome. Details now become scanty; we hear of his presence at the Council of Jerusalem (Acts 15:1), and of his journey to Antioch (Gal. 2:11).

It is certain that Peter labored in Rome as an apostle, that he was the city's first bishop, and that he died there as a martyr, bound to a cross (67 A.D.). According to tradition he also was the first bishop of Antioch. He is the author of two letters, the first Christian encyclicals. His burial place is Christendom's most famous shrine, an edifice around whose dome are inscribed the words: Tu es Petrus, et super hanc petram aedificabo ecclesiam meam.

- Excerpted from The Church's Year of Grace, Pius Parsch

Paul, the former persecutor of Christians

Paul, known as Saul (his Roman name) before his conversion, was born at Tarsus in the Roman province of Silicia about two or three years after the advent of the Redeemer. He was the son of Jewish parents who belonged to the tribe of Benjamin, was reared according to the strict religious-nationalistic party of the Pharisees, and enjoyed the high distinction of Roman citizenship.

As a youth he went to Jerusalem to become immersed in the Law and had as a teacher the celebrated Gamaliel. He acquired skill as a tent-maker, a work he continued even as an apostle. At the time of Jesus' ministry he no longer was at Jerusalem; neither did he see the Lord during His earthly-life. Upon returning to the Holy City, Paul discovered a flourishing Christian community and at once became its bitter opponent. When Stephen impugned Law and temple, Paul was one of the first at his stoning; thereafter his fiery personality would lead the persecution. Breathing threats of slaughter against the disciples of Jesus, he was hurrying to Damascus when the grace of God effected his conversion (about the year 34 A.D.; see January 25, Conversion of St. Paul).

After receiving baptism and making some initial attempts at preaching, Paul withdrew into the Arabian desert (c. 34-37 A.D.), where he prepared himself for his future mission. During this retreat he was favored with special revelations, Christ appearing to him personally. Upon his return to Damascus he began to preach but was forced to leave when the Jews sought to kill him. Then he went to Jerusalem "to see Peter." Barnabas introduced him to the Christian community, but the hatred of the Jews again obliged him to take secret flight. The following years (38-42 A.D.) he spent at Tarsus until Barnabas brought him to the newly founded Christian community at Antioch, where both worked a year for the cause of Christ; in the year 44 he made another journey to Jerusalem with the money collected for that famine stricken community.

The first major missionary journey (45-48) began upon his return as he and Barnabas brought the Gospel to Cyprus and Asia Minor (Acts 13-14). The Council of Jerusalem occasioned Paul's reappearance in Jerusalem (50). Spurred on by the decisions of the Council, he began the second missionary journey (51-53), traveling through Asia Minor and then crossing over to Europe and founding churches at Philippi, Thessalonia (his favorite), Berea, Athens, Corinth. He remained almost two years at Corinth, establishing a very flourishing and important community. In 54 he returned to Jerusalem for the fourth time.

Paul's third missionary journey (54-58) took him to Ephesus, where he labored three years with good success; after visiting his European communities, he returned to Jerusalem for a fifth time (Pentecost, 58). There he was seized by the Jews and accused of condemning the Law. After being held as a prisoner for two years at Caesarea, he appealed to Caesar and was sent by sea to Rome (60 A.D.). Shipwrecked and delayed on the island of Malta, he arrived at Rome in the spring of 61 and passed the next two years in easy confinement before being released. The last years of the saint's life were devoted to missionary excursions, probably including Spain, and to revisiting his first foundations. In 66 he returned to Rome, was taken prisoner, and beheaded a year later. His fourteen letters are a precious legacy; they afford a deep insight into a great soul.

- Excerpted from The Church's Year of Grace, Pius Parsch