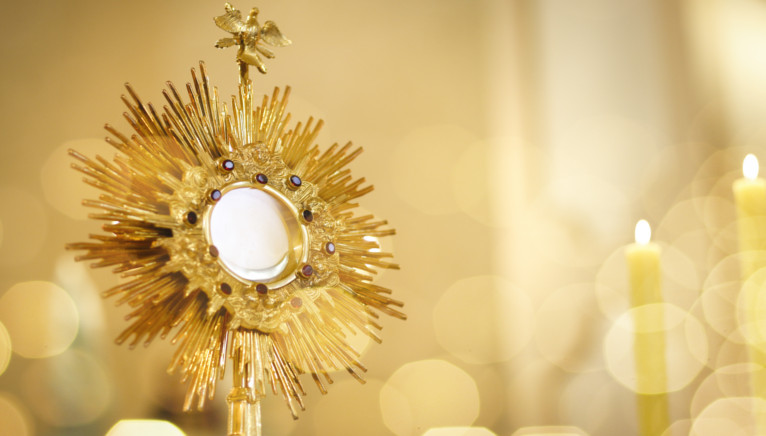 The Solemnity of Corpus Christi

Today the Church shows the world the Corpus Christi - the Body of Christ. The attention of believers is focused on the Sacrament in which Christ has left himself:  Body, Blood, Soul and Divinity. It is the reason for considering it as the holiest reality:  "the Blessed Sacrament", living memorial of the redeeming Sacrifice.

Sacrament of the gift, sacrament of Christ’s love pushed to the extreme: “in finem dilexit” (Jn 13:1), the Son of God gives himself. Under the appearances of bread and wine, he gives his Body and Blood, taken from Mary, his Virgin Mother. He gives his divinity and his humanity, to enrich us indescribably.

Gratitude for such an extraordinary gift springs spontaneously from the heart. “What shall I render to the Lord for all his bounty to me? (Ps 116 [115]:12). The psalmist’s words can be recited by each one of us, with the awareness of the inestimable gift the Lord has given us in the Eucharistic sacrament. “I will take the cup of salvation and call on the name of the Lord”: this attitude of praise and adoration resounds today in the prayers and hymns of the Church in every corner of the earth.

The Origins of the Solemnity of Corpus Christi

The Feast of Corpus Christi is celebrated in the Catholic Church on the Thursday after Trinity Sunday or, in some places, it is transferred to the Sunday. The feast was instituted to honour the Lord’s presence in the Blessed Sacrament.

There were 2 separate miracles that lead to the institution of the feast in the Catholic Church: a Vision to St Juliana of Mont Cornillon and the Miracle at Bolsena.

The Vision of St Juliana of Cornillon

St Juliana had a great devotion to the Blessed Sacrament from her youth and longed for a special feast to celebrate devotion to Our Lord’s Presence in the Blessed Sacrament. The saint had a vision of the Church under the appearance of a full moon which had one dark spot. During the vision, she heard a mysterious, heavenly voice explain that the moon represented the Church at that time, and the dark spot symbolised the fact that a great feast in honour of the Blessed Sacrament was missing from the liturgical calendar. St Juliana confessed the vision to Bishop Robert de Thorete, then Bishop of Liège, and Jacques Pantaléon, who later became Pope Urban IV. Bishop Robert was favourably impressed, and called a synod in 1246 which authorised the celebration of a feast dedicated to Our Lord in the Blessed Sacrament – Corpus Christi – to be held in the diocese in the following year.

Fr Pietro da Praga had grown lukewarm in his love of the Eucharist and had doubts as to whether the Eucharist was the real Body and Blood of Our Lord. In 1263, whilst celebrating Holy Mass in the Church Santa Cristina in Bolsena, at the breaking of the Bread, the precious Blood of Our Lord flowed from the Host, covering the altar cloth, corporal and the floor. Pope Urban IV, who was residing at Orvieto at the time, ordered that the precious cloth, covered with the precious blood, was to be brought to the Church of St Mary in Orvieto where it is still venerated even today.

Proclamation of the Feast of Corpus Christi

On the 11 August 1264, Pope Urban IV published the Bull “Transiturus de hoc mundo”, in which, after having extolled the love of Our Saviour as expressed in the Holy Eucharist, he ordered the annual celebration of the Solemnity of Corpus Christi, in the universal Church. The bull also granted many indulgences to the faithful for the attendance at Mass and at the Office. To celebrate the feast St Thomas Aquinas wrote the very beautiful liturgy celebrated on the Solemnity.