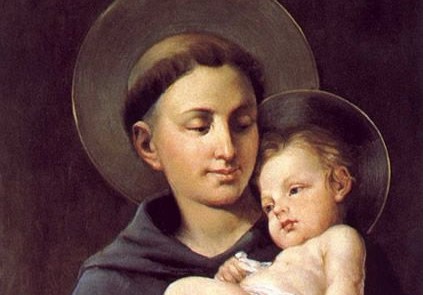 Feast of St Anthony of Padua

Who is St Anthony of Padua?

Saint Anthony of Padua, one of the Catholic Church’s most popular saints and patron saint of lost and stolen articles, was a powerful Franciscan preacher and teacher. He’s typically portrayed holding the child Jesus - or a lily - or a book - or all three - in his arms.  Many people give alms to St Anthony Bread in thanksgiving to God for blessings received through the prayers of St Anthony.

St Anthony of Padua’s life is what every Christian’s life is meant to be; a steady courage to face the ups and downs of life, the call to love and forgive, to be concerned for the needs of others, to deal with crisis great and small, and to have our feet solidly on the ground of total trusting love and dependence on God. 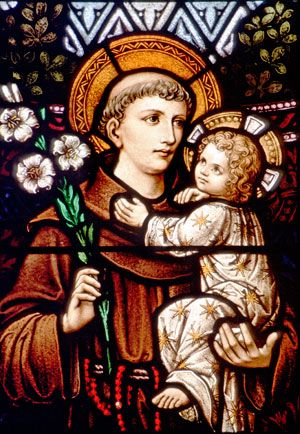 Teacher, Preacher, Doctor of the Scriptures

Among the Franciscans themselves and in the liturgy of his feast, St Anthony is celebrated as a teacher and preacher extraordinaire. He was the first teacher in the Franciscan Order, given the special approval and blessing of St Francis to instruct his brother Franciscans. His effectiveness as a preacher calling people back to the faith resulted in the title “Hammer of Heretics.” Just as important were his peacemaking and calls for justice.

In canonizing Anthony in 1232, Pope Gregory IX spoke of him as the “Ark of the Testament” and the “Repository of Holy Scripture.” That explains why St Anthony is frequently pictured with a burning light or a book of the Scriptures in his hands. In 1946 Pope Pius XII officially declared Anthony a Doctor of the Universal Church. It is in Anthony's love of the word of God and his prayerful efforts to understand and apply it to the situations of everyday life that the Church especially wants us to imitate St Anthony. While noting in the prayer of his feast Anthony’s effectiveness as an intercessor, the Church wants us to learn from Anthony, the teacher, the meaning of true wisdom and what it means to become like Jesus, who humbled and emptied himself for our sakes and went about doing good.

This excerpt is from the book, Saint Anthony of Padua: The Story of His Life and Popular Devotions, which was published in commemoration of the 100th anniversary of St. Anthony Messenger by Franciscan Father Norman Perry (1929-1999)

Legends about Anthony abound. But let’s turn to the known facts about him. Anthony was born in 1195 (13 years after St. Francis) in Lisbon, Portugal and given the name of Fernando at Baptism. His parents, Martin and Mary Bulhom, apparently belonged to one of the prominent families of the city.

At the age of 15 he entered the religious order of St Augustine. Monastery life was hardly peaceful for young Fernando, nor conducive to prayer and study, as his old friends came to visit frequently and engaged in vehement political discussions.

After two years he was sent to Coimbra. There he began nine years of intense study, learning the Augustinian theology that he would later combine with the Franciscan vision. Fernando was probably ordained a priest during this time.

The life of the young priest took a crucial turn when the bodies of the first five Franciscan martyrs were returned from Morocco. They had preached in the mosque in Seville, almost being martyred at the outset, but the sultan allowed them to pass on to Morocco, where, after continuing to preach Christ despite repeated warnings, they were tortured and beheaded. Now, in the presence of the queen and a huge crowd, their remains were carried in solemn procession to Fernando’s monastery.

He was overjoyed and inspired to a momentous decision. He went to the little friary in Coimbra and said, “Brother, I would gladly put on the habit of your Order if you would promise to send me as soon as possible to the land of the Saracens, that I may gain the crown of the holy martyrs.” After some challenges from the prior of the Augustinians, he was allowed to leave that priory and receive the Franciscan habit, taking the name Anthony.

True to their promise, the Franciscans allowed Anthony to go to Morocco, to be a witness for Christ, and a martyr as well. But, as often happens, the gift he wanted to give was not the gift that was to be asked of him. He became seriously ill, and after several months realized he had to go home.

He never arrived. His ship ran into storms and high winds and was blown east across the Mediterranean. Months later he arrived on the east coast of Sicily. The friars at nearby Messina, though they didn’t know him, welcomed him and began nursing him back to health. Still ailing, he wanted to attend the great Pentecost Chapter of Mats (so called because the 3,000 friars could not be housed and slept on mats). Francis was there, also sick. History does not reveal any meeting between Francis and Anthony.

Since the young man was from “out of town,” he received no assignment at the meeting, so he asked to go with a provincial superior from northern Italy. “Instruct me in the Franciscan life,” he asked, not mentioning his prior theological training. Now, like Francis, he had his first choice—a life of seclusion and contemplation in a hermitage near Montepaolo.

Perhaps we would never have heard of Anthony if he hadn’t gone to an ordination of Dominicans and Franciscans in 1222. As they gathered for a meal afterward, the provincial suggested that one of the friars give a short sermon. Quite typically, everybody ducked. So Anthony was asked to give “just something simple,” since he presumably had no education.

Anthony too demurred, but finally began to speak in a simple, artless way. The fire within him became evident. His knowledge was unmistakable, but his holiness was what really impressed everyone there.

Now he was exposed. His quiet life of prayer and penance at the hermitage was exchanged for that of a public preacher. Francis heard of Anthony’s previously hidden gifts, and Anthony was assigned to preach in northern Italy.  The problem with many preachers in Anthony’s day was that their life-style contrasted sharply with that of the poor people to whom they preached. In our experience, it could be compared to an evangelist arriving in a slum driving a Mercedes, delivering a homily from his car and speeding off to a vacation resort.  Anthony saw that words were obviously not enough. He had to show gospel poverty. People wanted more than self-disciplined, even penitent priests. They wanted genuineness of gospel living. And in Anthony they found it. They were moved by who he was, more than what he said.

Despite his efforts, not everyone listened. Legend has it that one day, faced with deaf ears; Anthony went to the river and preached to the fishes. That, reads the traditional tale, got everyone’s attention. 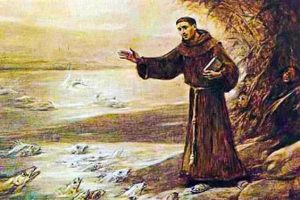 Anthony traveled tirelessly in both northern Italy and southern France—perhaps 400 trips—choosing to enter the cities where the heretics were strongest. Yet the sermons he has left behind rarely show him taking direct issue with the heretics. As the historian Clasen interprets it, Anthony preferred to present the grandeur of Christianity in positive ways. It was no good to prove people wrong: Anthony wanted to win them to the right, the healthiness of real sorrow and conversion, the wonder of reconciliation with a loving Father.